Today, Heart of a Champion’s ‘Saturday Salute’ is honorary Maritimer, Bill Zardo Sr! 🙂 From Brampton, Ontario, ‘Big Z’ has been a frequent visitor to the Maritime’s, since the 70s, competing against the best pro stock drivers around! Bill started racing at Pinecrest Speedway in 1962, racing against the likes of Jim Hallahan, honing his driving skills that would pay huge dividends later in his career! Bill won multiple track championships and big-name events all over Eastern Canada, spanning 40+ years! Always colourful, Bill was fun to watch getting to the front! Bill’s passion for racing was also a family affair, competing against his son Billy and now the third generation of Zardo’s are visiting victory lane on a regular basis! Bill, thank you for making all the trips down-east… you have the Heart of a Champion! 🙂 Photo: Mike Ettinger, Ken Bottomley, FB 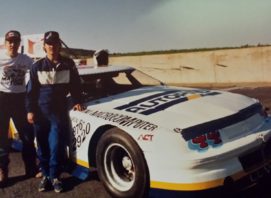