Heart of a Champion was founded in 2017 to help preserve motorsports heritage in the Maritime provinces of Canada. Our first project was the restoration of a vintage stock car, a 1967 Chevelle which was unveiled at the 2017 IWK 250. Heart of a Champion supporters then took the car on tour visiting race tracks and car shows throughout Nova Scotia and New Brunswick.

At the same time, we launched a website and Heart of Champion Facebook (FB) page which has evolved to include vintage racing photos, stories, and a weekly ‘Saturday Salute‘ to someone who has helped build motorsports in our region – someone with the Heart of a Champion. The social media following has flourished to over 13,000, clearly demonstrating an interest in and passion for our Maritime motorsports heritage.

In 2018, we added a vintage open wheel modified race car to our collection. After an extensive rebuild, we have taken it to tracks in the Maritimes and New England to help us gauge interest in a Maritime Canada-based vintage race car series. In July 2019, again at the IWK 250, we announced our intent to form the series. In 2020, we debuted the Hot Rod Classics Vintage Race Car Series. The series showcases race cars from 1985 or older giving veteran fans an opportunity to relive memories and at the same time provide a platform where newer fans can experience race cars of a bygone era. We participate in a handful of events in the region each year. 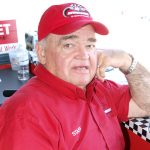 Heart of a Champion is lovingly dedicated to a man who has meant so much to so many, who has volunteered countless hours to countless charities, who has given back to his community, who has thrived  in the face of adversity, and who – thankfully – has loved motorsports his entire life. He has entertained us as an announcer, been a promoter, and is the co-founder of the iconic annual ‘250’ at Riverside International Speedway. Jerry ‘Jer Bear’ Lawrence is our inspiration for Heart of a Champion.