To say that Frank is a true Maritime motorsports ambassador, would be an understatement! Frank started honing his keen sense of ‘set up’ back in the 1970s at Atlantic Speedway helping such Modified ‘stars-of-the-day’ like Bill Jones and Jim King in the #40 Camaro!

In the ’80s, Frank helped guide the #50 Pro Stock, driven by Jr. Kelly, to many feature wins and a Championship, hauling the car from Onslow Speedway to Hammond River Speedway and every bull-ring in between!

But it was his partnership with the ‘Oval Outlaw’, Wayne Smith, in 1989 where he found his greatest success helping to guide the #44 Pro Stock team, taking home 6 championships over the course of the next 22 years!

Frank’s professional career was just as successful as he owned and operated one of the first private computer companies operating in Halifax during the early 1980s!

Since taking a step back from full-time racing in 2011, Frank has kept busy as the pace car driver at Petty International Raceway! Frank has been passionate, dedicated, and loyal to Maritime stock car racing for over 40 years, and with his wife Verda by his side every step of the way. Verda even took on the Chief Scoring duties with MASCAR for 12 years! Frank, for all the years of commitment, helping to grow the sport we love, you have the Heart of a Champion. 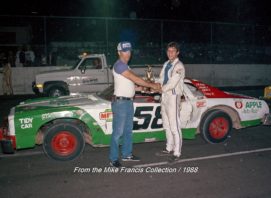