Today, Heart of a Champion proudly salutes Dunstaffnage, PEI native, Clarence Foster, as this week’s ‘Saturday Salute’! ???? Clarence has been a car enthusiast for life, a passion that was passed down to him from his Dad Ray! ????

Clarence has been a member of the Prince Edward Island Antique Car Club since 1972 and a lifetime member of the Island Vintage Cruisers! ????

Clarence and his Dad are the founders of the Spoke Wheel Car Museum, located in Dunstaffnage, PEI. Their collection of 50+ antique cars includes a 1940 Lincoln Zephyr convertible, a 1916 Buick and a 1931 Ford Cabriolet! ????

A true motorsports ambassador, Clarence built and operated East River Speedway during the mid-’80s, a 1/4 mile dirt bull ring! He even spent time behind the wheel himself!

Clarence and Ray, were inducted into the Maritime Motorsports Hall of Fame in 2007! ????

For the many decades of dedication to Maritime Motorsports, Clarence, you have the Heart of a Champion! ???? Photo’s: Shane Ross, Chris Hughes 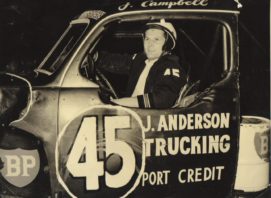